…when Leonor agreed to marry the English engineer Kipping to abide by her mother’s wishes, Rizal was devastated. He was said to have cried like a child after reading her letter.
Before marrying Henry Kipping, Rivera’s mother turned over to Leonor the letters she had kept from her all this while. Devastated Leonor burned the letters and kept the ashes a handmade box monogrammed “JL.”
..with frail health overcoming her upon the stillbirth of her second child – a daughter – and before dying, she requested that she be buried in a green dress. It was later discovered that in the hem of the dress, are delicately sewn letters she earlier received from Jose Rizal.
FOR LOVERS OF HISTORY, JOSE RIZAL AND THE REST OF MAN'S ACHIEVEMENTS, YOU WILL LIKE TO VISIT FOR SURE THE YUCHENGCO MUSEUM.
LOCATED AT AYALA AVENUE CORNER GIL PUYAT AVENUE IN MAKATI CITY. A STONE'S THROW AWAY FROM THE MAKATI CITY CENTRAL FIRE STATION.
at July 09, 2011

While gathering for the kick off ceremony of the Manila Bay rehabilitation at the Quirino Grandstand, I was surprised to see this.  ... 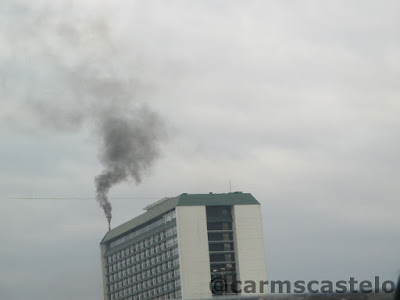