Egyptian journalist Riham Said dramatically turned the tables on a guest in a show that aired on Al Nahar TV earlier this year. During the program, Sheikh  Yousuf Badri balked at talking to her on camera because she was not wearing a veil, though he apparently had no reservations chatting with her when the camera weren't rolling. Said lambasted his hypocricy: "This is the kind of person who sues TV channels, attacks the media and puts on a show for the viewers. It is very unfortunate that people like this peddle our religion. I'm the one leaving, not you."
Source: Kick-Ass Women of the Muslim World

Not a pooping incident

Photo taken from one of the big rivers in Mindanao This photograph is not an accident of pooping. It seems a daily routine to the house... 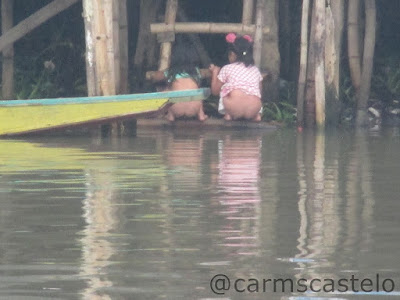